This year, Digitas SF decided to plan a week-long celebration of the life and achievements of Dr. Martin Luther King, Jr. First, shout out to my partners in culture for taking a step back and challenging the norm! We believe that his work and legacy deserve more than the one day celebration. We also believe that the celebration needs to be done in an environment where we spend most of our waking hours and with the people we spend most of our waking hours with, our co-workers.

So, we launched the 1st Digitas Perspectives and VivaWomen of Color San Francisco newsletter noting the purpose of #MLK90week. We shared daily trivia on Dr. King’s life and awarded the winners with books on Black culture. We promoted local opportunities for volunteering, highlighting the MLK Youth Leadership training that helps youth learn about employment and career opportunities. We hosted a work and watch viewing of Selma (shout-out to Ava DuVernay, Oprah, the actors and Dr. King’s family) and deployed a summary newsletter recapping the week and ways to keep his legacy alive.

The outcome. Together we learned that Dr. King would have made 90 years old this year. His last speech I’ve Been to the Mountain Top, was given one day before his assassination on April 4th in Memphis, Tennessee. That day was a heavy day of mourning for Americans, especially those involved in the fight for civil rights. From the Selma viewing, we saw the work that Dr. King and his strategic, brilliant team had done to end legal separation of Blacks in the United States with the 1964 civil rights act.

Selma wasn’t where it started. According to history, it was in 1955, the same year Dr. King received his P.h.D., that he began to rise as a prominent civil rights leader. He, along with Rosa Parks and the NAACP, began to strategize and execute the Montgomery Alabama Bus Boycott. The boycott involved 382 days of walking to work, harassment, violence, and intimidation for Montgomery’s Black community. The boycott was successful and the segregated public transportation laws in Montgomery were lifted. This successful moment in history proved that the architecture of the non-violent approach to fighting against racism was an effective one.

Dr. King didn’t do it alone. One of his greatest partners in the fight for civil rights was his wife, Coretta Scott King.

“Not enough attention has been focused on the roles played by women in the struggle. By and large, men have formed the leadership in the civil rights struggle but…women have been the backbone of the whole civil rights movement.” – Coretta Scott King

At a time when women were still viewed as property and thought to be unequal to men, we were at the front of the civil rights movement. Coretta balanced being a mother, movement work, speaking before church, civic, college, fraternal and peace groups. Not only did Coretta King play a dedicated and strong role in the fight for equality for Blacks, but she also participated in the Women Strike for Peace protest in Washington, D.C. in 1968. She co-chaired the Congress of Women conference and continued to drive the fight for equality for Black men and women with the Poor People’s campaign even after Dr. King’s assassination. 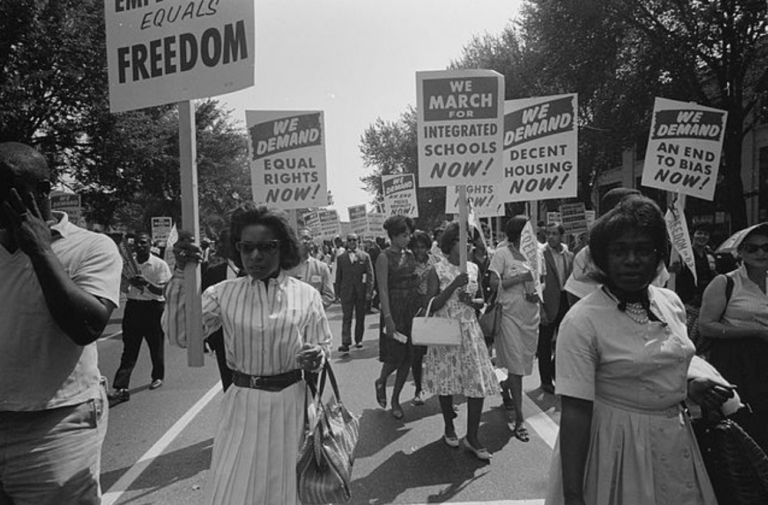 As we head into the official of celebration, let us all remember that we must be the change we want to see. If we desire an environment where cultural discussions flow freely, we must create that space for ourselves and others, even at work. Yes, while watching Selma, it was hard to see how Blacks in America were treated. The level of hatred was surreal but Dr. King left a legacy full of tools to confront and combat that hate. He taught us to take a stand, rally, march, let our voice be heard, to build communities, create discourse and keep the end goal in mind. Dr. King maintained a vision for a more diverse America where all people enjoyed the benefits of equality. During a time when the opposition implemented legislation that withheld rights from people of color and expressed hatred through beatings and killings, he refused to allow prison, violence or the threat of death sway his end mission. Instead, he stood beside his goal of achieving rights for all through nonviolent protests. We continue to experience poverty in the inner cities. We continue to fight for equal pay regardless of identity, gender or race. We continue to battle education inequality and police brutality. We continue to fight against the systematic constructs of racism. While it feels that in 2019, we are reliving the ’60s, we can continue to call for justice for all because we share Dr. King’s Dream.

*although the above mentions Digitas and BRG related work, all additional views are my own.

1 comment on “Celebrate #MLKDay at Work, your Culture Depends On It”